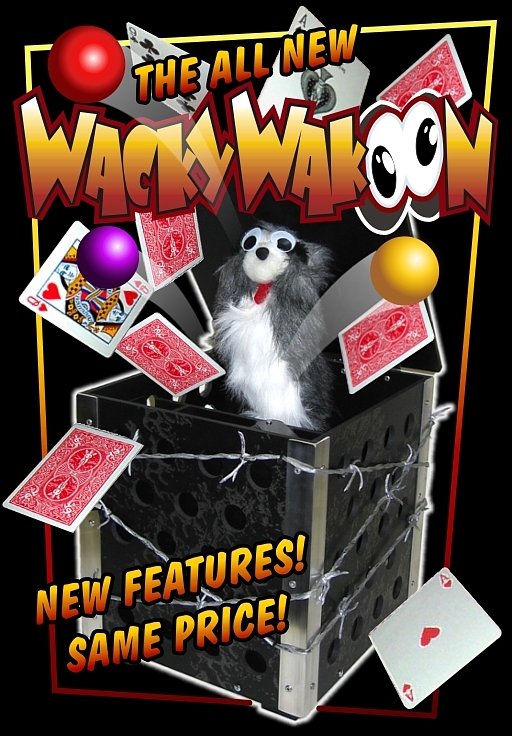 We are happy to release a BRAND NEW Version of one our greatest selling effects! “The Wacky Wakoon”.
We have added NEW FEATURES including a Built-In CARD FOUNTAIN which can launch cards up to 10 FEET in the air! We have also gave the outside of the box a new look which compliments the NEW WACKY WAKOON. A Black & White Wakoon sporting Googly Eyes and an a Goofy Tongue. The Ungimmicked Wakoon is Spring Loaded so you can perform all of your favorite “Rocky Raccoon” effects! All this making it even more wild to perform!
This is an ACTION PACKED routine, by Arthur Atsma & Chance Wolf, is guaranteed to bring fun & laughter to both Adults and children.
The basic routine is very similar to the Classic Snake Basket effect but at a much more rapid pace with a few more animations and features. The show begins as the Magician asks a spectator to give him a hand with the next trick. A card trick unlike any other as this trick makes use of a WILD ANIMAL!! The magician brings out a Burlap Bag that is THRASHING ABOUT and asks the lady if she would please reach inside and grab the animal as you prepare the Holding Cage. As expected, she refuses and you bravely reach into the bag and withdraw “Wesley the Wacky Wakoon”. Don’t let his sweet looks fool you as he is truly a VISCOUS BEAST! Wesley runs about the magicians body as he is thrown into the BARBED WIRE covered Rustic BOX and the lid is slammed shut to protect the audience from sure DANGER! Wesley begins to raise trouble throughout the routine as the Magician attempts to demonstrate Wesley’s Psychic and Magical Skills which include:

1) ALL NEW Built in Card Fountain which launches cards up to 10 FEET in the AIR!
2) Lid Rises as Wesley peeks out
3) Full mechanical control of Wesley rising & lowering
4) Two Ball Launching units
5) Chosen Ball is found upon Wesley’s Head
6) Chosen Card is found in Wesley’s Mouth
7) Burlap Bag gimmicked to thrash about creating the effect of a WILD ANIMAL in the bag!
8) Fake Barb Wire which is soft to the touch but looks DEADLY

Please note that the majority of the SYSTEM is completely MECHANICAL as NO BATTERIES are required ( excluding CARD FOUNTAIN ). In the tradition of the Time-Tested Jack Hughes Snake Basket, all the animations are operated BY HAND as you hold the box. Each trigger mechanism is positioned in a natural location with MINIMAL hand movement if any at all. Ready to perform, in complete confidence, at ANYTIME!