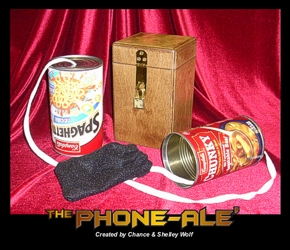 So you bought our CELLULATOR and you have no ending?! Finally, the answer is here! It is not just a FINALE’ to your routine but a PHONE-ALLY!! This is a fantastic finale’ for ANY OTHER ROUTINE involving the loss or damage of a Cell Phone, Watch, or whatever will fit within the bag!! When 5 heads get together on one idea you come up with a perfect solution and a LOT of FUN!

Effect: After losing or destroying a spectators cell phone, the magician states that he would like to make amends by offering the spectator a family heirloom…of sorts. It’s historical and monetary value would easily surpass the value of a simple Cell Phone. That is why it is kept safely LOCKED INSIDE A BOX! The Spectator is asked to unlock the box and open the lid. The Box is opened and the top of a large Spaghetti-O’s Can is seen. The spectator is asked to slowly remove the can as he notices a thick string attached to yet another can! Then follows a series of comical gags and patter based on Cell Phones etc. leaving the spectator wondering just what the heck is going on.

Once he has had enough, the Magician states “It seems there is something jamming up the inner micro circuitry of the mechanism.” The Magician holds the can mouth down and slowly lowers the string as a Black Bag appears from within the can. The spectator is asked to open the bag to find his RESTORED CELL PHONE from the previous routine!!

Folks, this is not just a great Finale’…it’s the “PHONE-ALE’!!!”
The Natural look of the props and simplicity in handling makes it a very magical effect and easy to perform. But don’t let the simple looks fool you…just the audience 🙂 You will love the load method as it takes 2 seconds and you are ready to bring out the box!!