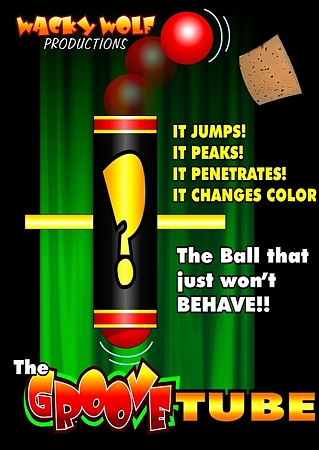 A child is invited onstage to assist in a magic trick. The Magi introduces Binky the Mischievous Ball. He will assist in the trick as well but be forewarned…he does NOT BEHAVE!!
A colorfully decorated tube is shown. The Magi takes “Binky” and places him in the tube demonstrating that he easily rolls into one side and out the other. He now explains that it would be true magic if “Binky” can roll through the tube with a Solid Rod stuck through the center. A colorful Rod is inserted into the tubes center and the fun begins. “With a wave of my Magic Wand, Binky will magically penetrate through the rod and out the bottom!” The Magi asks the child to place “Binky” into the top of the tube while he looks for his Magic Wand.
While the magician rummages around his prop case or his pockets, the child places the ball in the tube and, unbeknownst to the Magi, THE BALL SHOOTS OUT THE TUBE 5 FEET IN THE AIR!! The Magi looks back to the tube, sees it empty, looks to the child seeing him picking up the ball and states “Did you drop the little guy? That’s OK. Once again, just put “Binky” inside the tube and the MAGIC will begin!” The Magic continues to rummage for his wand stating he is having difficulty finding it.
The child places the ball in the tube and, unbeknownst to the Magi, THE BALL SHOOTS OUT AGAIN!! This process is repeated once more as the kids scream that the ball is jumping out however, on the third time, the Magi SEES the ball jump out and states “I told you guys that “Binky” was a mischievous little guy! I have the solution to that!”
A JUMBO CORK is placed in the top of the tube. “There! Now Binky cannot escape! However, you kids keep your eye on the tube in case he gets tricky! Now, to get find my Magic Wand and the magic will begin.” While the Magi rummages yet again for his wand, THE BALL IS SEEN TO SLOWLY PEAK OUT FROM THE BOTTOM OF THE TUBE! The kids scream that they can see “Binky” and the Magi quickly looks back but THE BALL SUCKS BACK UP OUT OF VIEW!! This is repeated again yet this time the Magi pulls off the cork and rolls the ball out SHOWING THAT IT IS STILL IN THE TOP. The ball is placed back into the tube and the cork is replaced. “I am telling you kids, there is NO WAY the MAGIC can happen until I wave my Magic Wand!” The “Look No See” bit continues as the ball peaks out as many times as the kids can stand it. Finally, the Magi says “ I am so sorry you kids cannot see the magic today as I just can’t seem to find my magic wand. “ The Magic removes the cork and rolls out “Binky” and HE HAS CHANGED COLOR!!! “WOW! Look at that! It looks like “Boinky” has changed place with his Brother “Binky”!! (or whatever silly justification gag you want)

A NON STOP FUN PACKED TRICK that all PACKS SMALL and PLAYS BIG!!

Please note: The graphics on the tube may vary from the illustration.
Dimensions: Tube is 9 ½” Tall x 2 ¼” wide 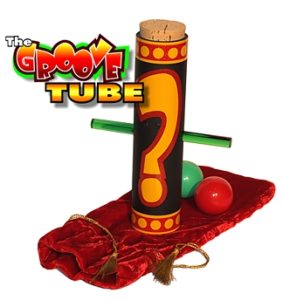