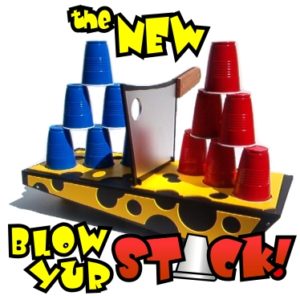 The ALL NEW “Blow yur Stack” is finally complete and IN PRODUCTION! We are SO EXCITED to release this COMPLETELY ORIGINAL idea which will Guarantee MAXIMUM Fun and Laughter as well as a FULL COMPLETE solid routine! After giving it much thought, it only made sense to make the entire trick look like a BIG HUNK o’ CHEESE and a really COOL MOUSE! We have Engineered the mechanics assuring you a High Quality long lasting prop.

Routine: The magician challenges a volunteer to a competition to see who can stack their cups, on the “Block of Cheese”, 3 times as fast as possible. The magician explains that he has performed this so many times that he could probably do it BLINDFOLDED! He asks the kids to scream out “ONE!, TWO! & THREE! after every successful stacking by the volunteer. The Magician BLINDFOLDS HIMSELF and the race begins with the volunteer successfully stacking the cups and the kids shout “ONE!”. Meanwhile, the Magician is fumbling about trying his best to get his stack complete. The child begins his SECOND stack and just before he completes it…he BLOWS HIS STACK as the cups fly about. The child scrambles for his cups and begins again only to find he can’t stop BLOWING HIS STACK! In the end, after all the laughter and shouting, the child WINS and the magician states…“Actually, I’ve been cheating a little”, says the magician. “I’ve been having a little fun with you. You see, I don’t really work alone. I have a ‘little helper’ running around here somewhere. His name is MEEKO”. The magus looks about while holding the ‘Cheese block’ calling for MEEKO and unbeknownst to him, MEEKO the Mouse pokes his head up from a HOLE in the Block of Cheese! The kids see him but the magician doesn’t. The magician looks under the Block and the mouse pops up without him being aware, but the kids see him again and let the performer know in a loud way. Every time the performer looks where they tell him the mouse disappears back into the Cheese. Finally , the Magician sets the table down, in frustration, and sends the volunteer to his seat but before he makes his way back, the magician shouts ” MEEKO! THERE YOU ARE!!”

The Mouse is found HANGING ON THE KIDS BACK!!

Besides the belly laughing routine you get a Run Rabbit Run effect built in! This wonderfully new routine involves the whole audience, is packed with laughs and plays VERY BIG in all venues. This is just as much FUN for ADULTS as it is for KIDS! We’ve tried it on both and the adults have as much fun or even more! 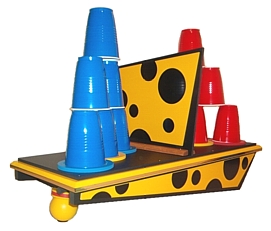 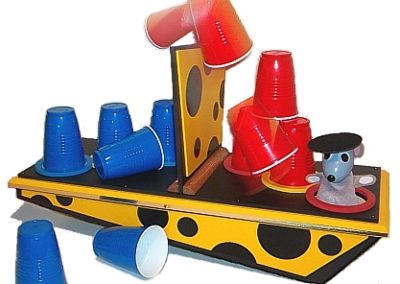