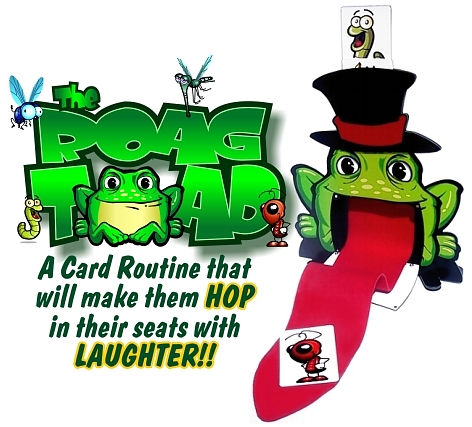 Concept input from Clarence Atsma and Arthur Atsma
We are VERY excited to release our latest and most VISUAL effect just in time for this Summer’s Library Show theme “Catch the Reading Bug!” This effect Packs Flat and PLAYS HUGE with a quick reset!
Basic effect: The magician begins by introducing Roagie the Roag Toad. After a bit of discussion of what frogs like to eat? The kids scream out various foods, insects etc as the Magi fans out eight 4” x 6” JUMBO CARDS showing various CARTOON BUGS that match the kid’s guesses. Jokes are thrown in as each card is shown, as some cards are ridiculous Cartoon Foods that a Toad would never eat.
The Magi then explains that Roagie would like to perform his first magic trick for the kids today! Dressing up the Toad for the part, the Magi places a large Top Hat onto Roagie and the fun begins! It is said that the Psychic Toad will LEAP into the child’s MIND and tell him what his favorite food is! The Toad’s EYES MOVE BACK and FORTH in approval. A child is asked to select a card and the card is lost in the deck. The deck is placed into the Top Hat and Roagie begins his Magic as his EYES MOVE SLOWLY then SHAKE RAPIDLY SIDE-TO-SIDE as a CARD SLOWLY RISES FROM HIS TOP HAT!! The Magi shows the card and cues the audience for applause but…no applause is heard. The Psychic Toad has FAILED. His eyes slowly look away in humiliation. Roagie is told that he has another chance as his EYES SHAKE RAPIDLY SIDE-TO-SIDE in JOY!!!…Yet only to FAIL at locating the card yet two more times.
The Magi looks at Roagie in disgust wondering why it went so well in practice. The Toad apparently whispers something into the Magi’s ear. The Magi leans into Roagie…“What did you say? YOU ATE IT? NO!!! Did I not FEED YOU before the show?! His eyes slowly move away.
“Come on Roagie, spit it out!” His eyes SHAKE RAPIDLY SIDE-TO-SIDE! Let me help you, I know the HEIMLICH maneuver. The Magi slaps the Toad on the back. “Come on Roagie! Out with it. Spit it out!” On the third slap, the TOAD’S MOUTH FALLS OPEN AS A 30” RED TONGUE ROLLS OUT WITH THE CHOSEN CARD ON IT’S END!!!