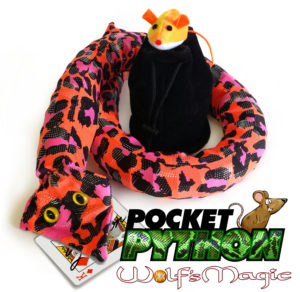 A Brand New take on a classic trick however an ALL NEW ROUTINE and PROPS have been created that maintains the ELEMENT OF SURPRISE when the SNAKE JUMPS OUT! A BIG ROUTINE that FITS IN YOUR COAT POCKET!  NO ELECTRONICS and at an AFFORDABLE PRICE!!

The Magician explains that he will break the Magician’s Code and REVEAL exactly how all his magic has been done throughout the show!  He draws attention to a small velvet bag that has been sitting on the table throughout the show. A small toy mouse is removed and introduced as “Lightning”! The worlds FASTEST MOUSE!  A short humorous tale is spun explaining how “Lightning” is a “Rescue Mouse”. The routine continues explaining how ”Lightning” IS the secret to the magic!  As he has been zipping around the stage all night long executing the secret magic moves right under your nose! And tonight…you will give the audience the chance to CATCH LIGHTNING…doing the magic!

“Lightning” is placed into his bag, a card is FREELY chosen, SIGNED and placed back into the deck. The audience is told to keep their eyes on the bag as you explain that, on the count of three, “Lightning” will race from the bag, dig through the deck, find the chosen card, eat a piece of cheese, write a letter to his grandmother, race back into the bag and enjoy a quick adult beverage…all before your eyes…and you WON’T SEE IT!!

ONE! TWO! THREE!…..aaaand…they SEE NOTHING!

You assure them that “Lightning” has succeeded and open the bag taking a look inside. As expected! Fooled again by “LIGHTNING”!

“Is THIS your card?”

Casually tipping the bag forward for the person to verify….

SHAAAWIIING!!! A LARGE 36” SNAKE JUMPS OUT shocking the spectator!!! The snakes mouth is slowly lifted up REVEALING THE SIGNED CARD IN HIS MOUTH!!!

BUT WHERE IS LIGHTNING???? THE SNAKE ATE LIGHTNING!!!

In a panic, the snake is given several firm shakes as “Lightning” falls from his mouth to take a bow!!

Two “Lightning” the Mouses along with Complete Scripted Routine

AVAILABLE IN HOT GREEN ONLY!!