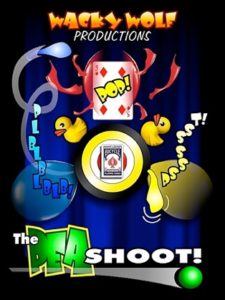 Created by Chance Wolf & Oscar Munoz and based on Warren Stephens’ “Balloon Tray,” this is a full routine with a brand new kicker ending!

A 9” hand held Shooting Gallery is shown with three 9” Balloons attached, two Rubber Duckies and Bullseye in the center. A card is chosen from a normal sized deck and lost in the pack. The cards are placed back in the box.
The Magician explains that he has PLACED A PREDICTION INSIDE one of the BALLOONS! The child is given a JUMBO PEASHOOTER and a JUMBO PEA. He is instructed to choose any balloon, shoot the Pea the chosen balloon and the prediction will be revealed! Once again you have a FREE CHOICE of ANY of the THREE Balloons and states that the card will magically appear in the chosen Balloon.
Before the spectator can make a decision, one Balloon SLOWLY DEFLATES. Magician continues offering to have them SHOOT ANY of the..er..TWO BALLOONS and the Card will PLBLBLBLBT!! The Second Balloon FLIES OFF the WAND!  Magician continues…er…ok…you have a free choice to shoot THIS balloon. Spectator of course chooses this Balloon and POP!! The magician PLACES THE TARGET IN FRONT OF HIS FACE. The child SHOOTS THE PEA and the balloon explodes! The JUMBO CARD APPEARS however it has a LARGE HOLE IN THE CENTER! The Magician slowly lowers the card from in front of his face and smiles then OPENS HIS MOUTH SHOWING THE PEA CAUGHT IN HIS TEETH!  The Pea is removed as the Magicians states…”Hmmm… tastes like pea!” The kids burst into laughter and amazement of the magical feat!

Solid Mechanics and absolutely NO HAND MOTION is detected when triggering each gimmick! Children’s Routine INCLUDED! 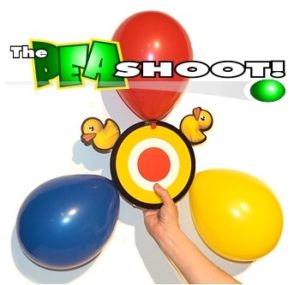